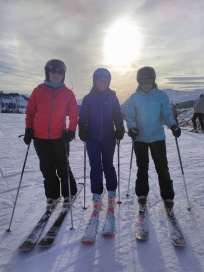 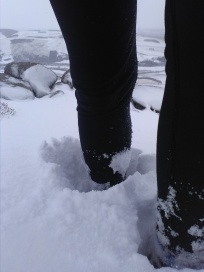 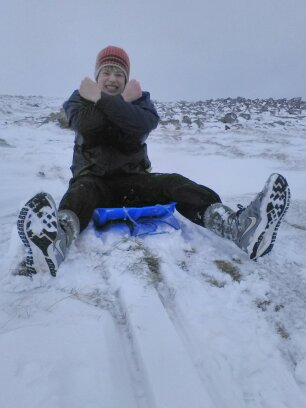 What a long winter with weeks where running proved almost impossible due to snow drifts and flooding… hence all the alternative activities.

We have started our Spring/Summer club runs on Tuesday evenings; now meeting at the Duckponds/Wooler Common at 6.30 pm. So far it hasn’t felt like warm weather training with freezing winds, snow and knee-deep bogs, but at last we are back in the hills!

Many thanks to everyone who supported the event on 20th January 2018. We raised £1060 for Macmillan and Breast Cancer Care.!!

It a was cold, but sunny day. Fortunately the road up to the Golf Club had thawed by the time folk arrived, thanks to John and Glen for helping to spread salt and grit. Fantastic turn out (more than expected) – 126 runners and walkers set off, from 3 to 70 years old.  All in good spirits with snow to play in and stunning views of the Cheviots. Mary and Michelle performed miracles in the kitchen with magic soup pots. Pam, Cherry, Twink  and I juggled with raffle tickets and prizes. Cool runnings by WRC with Toria, Simon and Saul placed in the run. Great support from WRC , Sarah helped mark the course and overwhelmed by everyone’s generosity with raffle prizes etc. A good day was had by all, looks like we might have to do the same thing next year…. 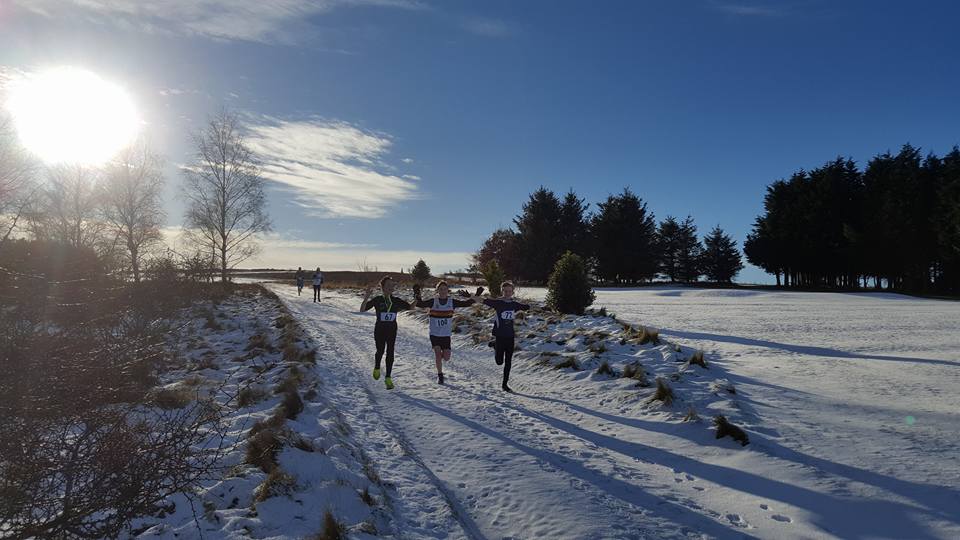 Our annual Festive Charity Event has become a Resolution Run/walk!

All proceeds for Macmillan Cancer Support and Breast Cancer Care

We had a fantastic turn out for our festive ‘training’ run on the last Tuesday before Christmas; there is nothing like the promise of mulled wine and mince pies to lure reluctant runners out on a winter’s night! Plenty of appropriate head-wear and sleigh bells in evidence. The residents of Wooler must have been cheered to hear our angelic voices as we serenaded the illuminations. A grand evening, thanks to Pam for organising us as always.

And now we have 2018 to look forward to, wishing everyone a healthy, injury-free year of running! 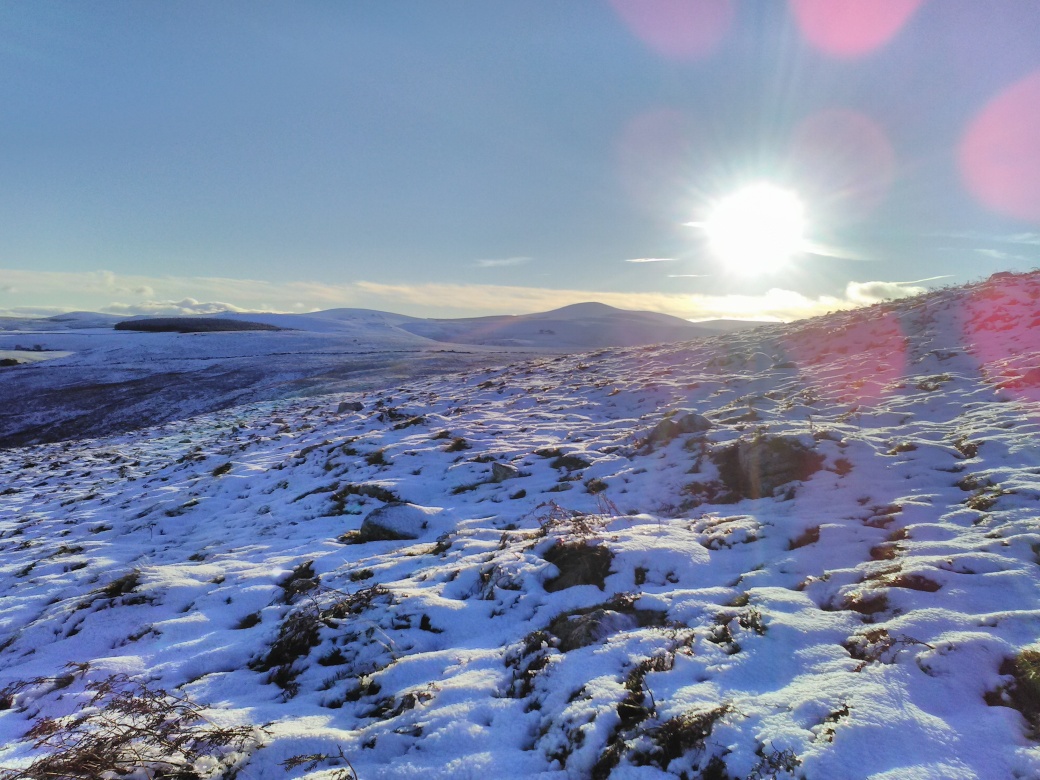 Last month we made our annual trip north for 48hrs away to run for less than 2!  Carrie, Simon, Pam and, Saul ran the half marathon and on the whole we were all pleased with our times – but it is a downhill course after all!  Claire R, John and Toria ran the 10k and Claire made it in under 50 minutes for the first time.  John’s wife joined in with the eating a drinking which we squeezed in around the athletics!  It’s a scenic course, half on the road and half on forest tracks.  Although the forecast was awful and the skies very dark, it was mild and dry all weekend.

The nights are fair drawing in… last training session starting at the Duckponds on Tuesday 3rd October, 6.30 prompt with head-torches. From Tuesday 10th October  meeting at Padgepool Place car park. We’ll aim for structured sessions lasting for about an hour- warm up, drills and speed/hill reps. Possibly starting with a 5k timed run so folk can gauge how fast to run in speed sessions. As always there will be the flexibilty to have a jog and a chat and the opportunity to enjoy healthy drinks and snacks in the pub afterwards!.

On Friday 15th September three small, but feisty athletes (Sarah, Jane and Claire B) journeyed north, leaving the gentle slopes of our dear Cheviots for the rugged Angus Glens. Fuelled by flagons of coffee we braved the magic harp across the Forth and drove deeper into Scotland. We arrived in the beautiful Glen Clova slightly daunted by the towering peaks and the horrendous weather forecast for the coming day. We ate heartily, had a glass of wine (carbo-loading) and spent a sleepless night in a bunk house designed for hobbits.

Race morning and the wind was howling as we prepared our good selves and our bikes for the Duathlon (Extreme). 27k bike around the valley roads, 14k run up two Munros and a final 6k cycle to the finish line. At least it wasn’t raining. We set off in the last group of competitors to the sound of  bells ringing and a larger than life Highland Coo waving us cheerily on our way (too much wine!?). Initially flying with a tail-wind thinking how amazingly fit we were, overtaking a few competitors (to be fair mainly those on unicycles or with mechanical problems). Then we turned into the wind and it was a battle to keep the bikes upright and the rain came. Ah fabulous, soaked to the skin and not even an hour into our venture.

Rainbows and cheery banter welcomed us into transition. There was the usual struggle to rediscover running legs and we were off. Steady incline through pine forest before emerging into the spectacular Corrie Fee. A sudden burst of sunlight and more rainbows, we were blessed, then cursed by the very steep ascent beside the waterfall and the entry into a bleak, cold landscape. The wind buffeted us as we ascended Mayar. The main goal now was remaining on our feet as we crossed the summit plateau and started on the ascent of Dreish. Slippery rocks and hail adding to our joys. It was a relief to descend down the Kilbo Path, though at one point Sarah fell and lay with a leg raised in the air until restored to her feet by a handily tall runner, luckily only cramp. A long descent through the trees until we approached transition again, welcomed by cheers and cowbells. A last final sprint on the bikes, wind assisted at last. We finished in a time of 4 hours and 4 minutes. Euphoria as we celebrated our survival with a bottle of Moet and later buckets of scampi and chips.

The Duathlon (extreme)  is organised by the local Search and Rescue Team as a fund raiser. Really friendly competitors and marshals, stunning scenery, highly recommended.

Last Tuesday (5th September), about 25-30 runners from these 3 clubs met at The Ponds for our annual social run.  Unfortunately the local midge population had detected ‘fresh blood’ and come out in force so we headed off promptly out towards Broadstruther on the Chevy Chase route.  Shortly before Broadstruther we turned right and ran up to Kenny’s Crag (named by us a few years ago on Kenny Young’s 50th birthday).  Our timing was perfect as the sun was just setting over the hills, but the photos didn’t come out too well.  From here we dropped down to the cattle grid on the track to Commonburn and followed the track / road back to The Ponds as the light was fading.  Once again, the weather had treated us well and shown off our patch in its best light.  Afterwards we all headed to The Angel for chips, sandwiches and a few drinks.

Last Tuesday, 10 of us met at Calder for the annual run then bothy party.  Claire R and I had driven to the bothy and set up the food and drink then ran down to Calder to meet the others.  After a lovely 6.5 mile run around Ilderton Moor, Ilderton, Middleton Dean and Threestoneburn, we reached the bothy at The Dod just as the light was fading and met Kenny who had cycled up from Wooler.  We had a drink and some snacks then most of the team completed their run with a gentle 1.5 miles back down the track to their cars.

227 (of an expected 286) runners started the epic Chevy Chase fell race this year on a windy but warm day.  The weather during the month prior to the race had been very warm with little rain fall – two days before the weekend we had 48 hours of rain so the underfoot conditions were back to being boggy and fairly spongy.  You cannot do a race of this calibre without getting muddy legs! The hills were clear of cloud making for good visibility and the runners certainly took on the challenging course with much enthusiasm and determination.  On completing the 20 miles runners returned to the start point to be refreshed with mugs of tea, juice, sandwiches and cakes and also to get their well earned T   shirts.

This year a new team took over the running of the race, kindly supported by the ‘old gang’ of Claire Bagness and Mary Logan – a hard act to follow certainly but the committee made up of Wooler Running Club Members and local outdoor pursuits company Reiver Guiding did a grand job and the day went smoothly thanks to the whole team.

As ever an event such as this cannot take place without the volunteers at the start/finish point, the marshalls out and about on top of Cheviot and Hedgehope as well as at the furthest flung points on the course.  Also the superb assistance of The Northumberland National Parks Search and Rescue Team and the landowners who allow us access to this amazing area.  Prizes were donated by Gear for Girls – a great local shop in Wooler which provides specialist sport and outdoor clothing and Salomon.  Without the generosity of the above we would not be able to put on such an event, and we are incredibly grateful to them all.

John Butters repeated his win of last year in an incredible time of 2.57 – impressively dipping under 3 hours.  Will Robson came in second in 3.12 closely followed by Graham Simpson in 3.17. Graham also won the prize for first local male home. The ladies also had a close fought battle with Katherine Davies winning in 3.50 and Karen Robertson 3.51 – neck and neck right to the last few metres.  Shirley Cassidy came in just behind them in 4.02 and she also won the prize for first local female home.

The  team prize for men  went to Northumberland Fell Runners (John Butters, John Duff and Scott Gibson whilst the ladies prize went to North Shields Poly (Katherine Davies,  Lisa Henderson and Jenny Simpson)  The Geordie Douglas Memorial Trophy presented to the oldest and boldest competitor went to Mike Gill and The Alan Gardener Trophy which celebrates the Spirit of the Chevy Chase was awarded to Glen McWilliams.  Local Wooler resident, Glen,  has competed in 25 Chevys, he organises fell races and charity runs and has also created the McWilliams Round – a unique hill run starting and finishing in Wooler.

It is hoped that you all enjoyed this year’s race and we very much look forward to seeing you all in 2018.  Bring it on!

Club training is held on a Tuesday night at 6.30pm. Followed by a pint at approximately 8pm in the Angel Inn pub.